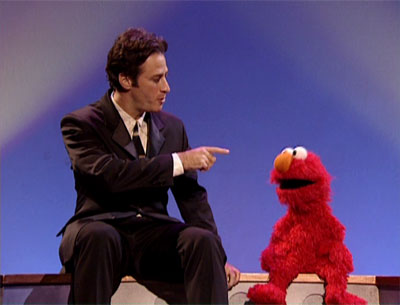 Elmopalooza is a one-hour TV special that aired on ABC on February 20, 1998.

Jon Stewart plans to host a music special to celebrate Sesame Street’s 30th anniversary. Jon and the show's crew, including producer Prairie Dawn, are in a dressing room getting ready for the show. Elmo visits them before the show starts and then leaves, shutting the door before Jon can tell him that the door is broken: it won't open once it's shut. Elmo decides to host the show, and the rest of the Sesame Street cast work behind-the-scenes, presenting music video remakes of classic Sesame Street songs.

Meanwhile, Grover drives Susan, Gordon, Gina, Bob, and Mr. Handford in a limo to the studio, but Grover gets lost and they end up in Roswell, New Mexico.

The Evolution of 'Sesame Street'

Sesame Street has been a part of children’s worlds since 1969. Fifty years ago, TV producer Joan Ganz Cooney and Carnegie Corporation vice president Lloyd Morrisett, concerned over what Cooney called the “wasteland” of options available to preschool viewers, decided to add nutrition to a diet heavy on junk food. Two years later, in 1968, the Children’s Television Workshop (renamed Sesame Workshop in 2000), funded by $8 million in grant money from Carnegie, the Ford Foundation, and the US government, was formed. Sesame Street was built upon Cooney’s study, “Television in Preschool Education,” and its belief that toddlers from all walks of life could be better prepared for the classroom.

With its inner city setting and use of non-white performers, Sesame Street, which began airing on public television on November 10, 1969, looked different than other kids shows. No one particularly liked the show’s title (which was deemed hard to pronounce by the intended audience) but it stuck, and the neighborhood grew up rapidly. Jim Henson’s Muppets, which had been kicking around TV shows and commercials for a few years, were prominent residents, particularly the newly created Oscar the Grouch and Big Bird, who could easily interact with the human cast. (In the show’s test phase, the Muppets were restricted to their own segments, but kids liked seeing them in the “street” scenes, too, and they were added against the advice of its educational advisers, who thought their presence might be jarring.) By the following November, Big Bird had made the cover of Time magazine, the show had won the first of its more than 100 Emmy Awards, and President Richard Nixon was a fan.

There were growing pains. Mississippi at first refused to air the show, citing its integrated cast, then reversed its decision; and Latinos and women complained about stereotyping. But Sesame Street, a show born of its times, modified with them as well—in 2007, as childhood obesity became an issue, Cookie Monster, who had been with the cast since the beginning, announced that “cookies are a sometimes food” on Martha Stewart Living. The concept went global, with Sesame Street airing in 140 countries by its 40th anniversary, and 20 international versions being launched.

Federal funding ceased in 1981, as the Federal Communications Commission deregulated commercial restrictions on children’s shows and the number of programs—and the number of ads broadcast during those shows—rose. But viewer-supported, ad-free Sesame Street, buoyed by spin-off product streams like books, magazines, and toys, held its own, commercially and creatively. (Adding the enormously popular Elmo to the Muppet cast, and giving him his own segment in 1988, didn’t hurt.) Childbirth, and child abuse, were among sensitive topics discussed, and that candor has more recently seen episodes devoted to the September 11th attacks and Hurricane Katrina. When Will Lee, who played the beloved store owner “Mr. Hooper,” died in 1982, his passing was explored in an Emmy-winning episode. The deaths of key personnel like composer Joe Raposo, in 1989, and Henson, in 1990, were losses the show managed to absorb, as Sesame Street adjusted to the arrival of new kid programs like Barney and Friends on the block.

As Sesame Street changed TV, so, too, has TV changed Sesame Street. In a world of cable channels, websites, and apps, viewer donations and distribution fees paid by PBS member stations have slumped and production costs have risen, thus Sesame Workshop’s five-year partnership with HBO, which hasn’t produced any original children’s programming in a decade. The new episodes will have new/old “retro” production design, says Tony Award-winning scenic designer David Gallo, and Big Bird will move into his own home tree. PBS viewers feeling “empty nest” syndrome, don’t fret: the HBO episodes will air on public television in the fall, as Sesame Street embraces the new while retaining its core values.